Most of this I created in my early twenties, while I still lived in the Soviet Union. I used oil, pastels, watercolor, gouache, ink, as well as rusty nails, cigarette ashes, matchsticks, and whatever else came in handy on my travels through Ukraine, Siberia, the Caucasus, and Central Asia.

Having no state-issued art school diploma, I was denied professional art supplies. They could only be sold to members of the Artists Union. This has a curious explanation, which goes to the root of our existence as subjects of the state. You can find it in my recently published book, Hotel USSR.

Young and rebellious, I thought I could beat the system and continued to paint. My youthful enthusiasm lasted for several years, until I realized that I’d been beating my head against an impenetrable wall made of regulations that governed our existence within the state. Feeling thwarted, I gave up painting and moved on to writing, which I thought only required a pen and paper. I was wrong there too, but that story is for another day.

I now live in Florida, making digital graphics. On a recent trip to my Ukrainian hometown, I found my old creations in my parents’ closet, in various stages of decay. I photographed them and later digitally restored the images on my computer. Fortunately, I no longer needed an approval from the state to exhibit them in my personal online gallery and sell the prints to anyone who wants them.

Restoring these pictures brought back memories of those years and all the stories behind their making. I started to write them down and later published an illustrated book that brought the stories and the pictures together. See below. 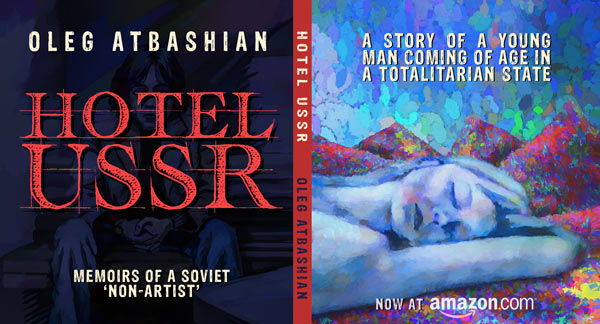